Unlikely Signs and Prophets {on Jonah} 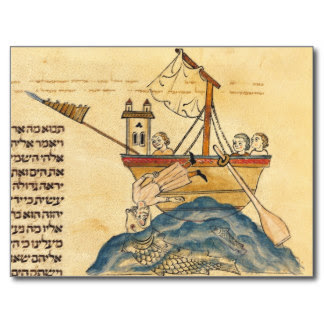 I’ve written a bit about Jonah over at my blog, homecookedjesus.com.  I’ve read Jonah I don’t know how many times, and recently I completed my own translation of the book that I’ve been slowly publishing on my blog.  Jonah is a strange book in the Old Testament.  It’s included in the prophets, but its style is nothing like any of the prophets.  It’s a narrative wrapped around a poem about an unlikely prophet.  This unlikely prophet sticks in our memory largely because of the incredible story, but also because of the words of Jesus.

Then some of the scribes and Pharisees answered him, saying, “Teacher, we wish to see a sign from you.” But he answered them, “An evil and adulterous generation seeks for a sign, but no sign will be given to it except the sign of the prophet Jonah. For just as Jonah was three days and three nights in the belly of the great fish, so will the Son of Man be three days and three nights in the heart of the earth.
Matthew 12:38-40

Jesus’ contemporaries wanted a sign.  They wanted Jesus to manifest his power.  His acquiescence to their demands is counter-productive.  He does not furnish parlor tricks for them.  He promises them an unparalleled miracle, not seen since the time of Jonah.  What is this sign?

First let’s think about the language used here.  Jesus says “the sign of the prophet Jonah.”  This could be taken to mean the sign that Jonah possessed, or demonstrated personally…the sign belonging to Jonah.  It could also be taken to mean the sign directed at Jonah.  If we read his story carefully, he doesn’t possess any signs.  He performs no miracles.  Rather, his life is punctuated with YHWH’s miracles all around him: the repentant sailors in chapter 1, the fish in chapter 2, and the repentant Ninevites in chapter 3.  Notice that two of those miracles are saving actions towards outsiders.  In fact, the one sign that isn’t directed at Gentiles is actually YHWH’s way of getting Jonah to go preach to Gentiles.  So all the signs in Jonah point to reaching the nations.  If we consider the story of Jonah…YHWH wants to convince him that his grace is for everyone.  But Jonah clearly isn’t having it (see chapter 4 if you don’t believe me).

So what’s the sign?  If YHWH is trying to communicate to Jonah that his grace is for everyone, how might he do that?  Well, by reaching the unreachable, that’s how.  So that’s what he does.  He reaches the sailors, and he reaches Nineveh.  That’s the sign given to Jonah that YHWH wants to reach the entire world.  And that’s the sign Jesus will give to his contemporaries.  Let’s look at the next few verses:

Notice, Jesus ties the sign directly back to the repentance of Nineveh.  The sign given to Jonah is repentant Gentiles, it’s God saving the unsavable.

He’s still performing this miracle.  You are evidence of it, and so am I.  We’re the sign of Jonah.  We’re an indication of how miraculous God’s mercy is.  We are unfortunately prone to forget this, but in spite of that God is still drawing Nineveh to himself.  There are stories upon stories of people meeting Jesus in dreams, people who have never heard the gospel before.

This Christmas season, I want to encourage you to consider who we believe to be beyond God’s reach.  Who do we see as untouchable?  Who do we see as rightly deserving God’s wrath?  Because that’s precisely who God wants to save.  And he wants to use you to save them.  His grace is scandalous because he forgives things we wouldn’t dare mention, let alone forgive.  We often want signs.  We want miracles.  We want God to make himself drastically obvious.  So did the Pharisees.  And Jesus obliged.