Say My Name {Crafting a Heart for Jesus} 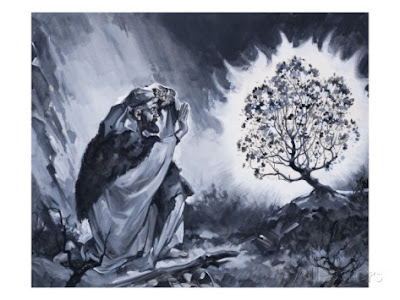 I imagine these are the sort of thoughts that Moses was thinking while he was tending sheep for Jethro, his father in law.  Then there was a bush.  It was burning…but somehow still not actually changing because of the fire.  According to common sense, it should be consumed by the fire, but the fire didn’t ruin it.  Moses, in what is one of the strangest phrases ever uttered in scripture, responds with “I will turn aside to see this great sight, why the bush is not burned” (Exodus 3:3, ESV).  No, not, “Where did that crazy fire come from?” or “What on earth is happening?”  Nope.  Moses is apparently so deep in thought that he casually states, “I think I’ll have a look.”

This is one of the most important revelations of God in the entire Bible.  There are multiple passages in the NT that reference it directly or indirectly.  It’s everywhere.  We all probably know the broad contours of the passage.  God tells Moses to go to Egypt to get his people.  Moses asks a bunch of questions and comes up with a bunch of excuses.  God says “I AM THAT I AM.”  Apart from sounding a bit like Popeye, we don’t think too much about that statement.  But the biblical authors did.   So, let’s have a look.

“What is his name?”  That’s a pretty weighty question.  Remember, Moses spent a great deal of time in Egypt.  He knew Egyptian gods.  He knew that their names often indicated their sphere of authority.  Ra was the god of the sun.  Horus was the god of the sky.  Osiris was the god of the underworld.  So…it makes sense that Moses wants a name.  It’s akin to saying, “Okay, I’ll go.  But I want to know…what is your sphere of authority?  Where are you powerful?  If I get into a fight with the Egyptians, and you control water, I don’t want to be in the desert.  So where is your power?”  God’s response, “I am who I am.”  Not “I am the god of…”  Nope.  Just, “I am who I am.”  Moses asks for the extent of his power and God responds, “yes.”

Uh…God this isn’t a yes or no question.  What is the extent of your power?  How far can I trust you?  How big are you?   Yes.

That answer is both terrifying and encouraging.  It’s terrifying if you are running from God, which we all do.  But it’s encouraging…no, it’s more than encouraging.  It’s a warm blanket of security.  It’s more than that.  Words don’t describe how this answer ought to make you feel.  God’s definition of himself is a blanket affirmation.  He is.  So no matter where you are, he is.  No matter what you do…he is.  No matter where you go, he will be.

That’s the other interesting thing about this passage.  It’s written in Hebrew, where there isn’t a huge distinction between present and future tense.  The emphasis in the verbal system isn’t when something happened.  The emphasis is on whether that action is done.  When God states his existence, he is indicating that his existence isn’t finished.  It can’t be finished.  He is.  He is an unchangeable fixed point in the universe.  He is steady as all else fails.

This is further emphasized by the giving of the name LORD, which in Hebrew is related to the verb “I am.”  There are many who see the name LORD (sometimes spelled Jehovah or Yahweh) as a form of the verb “I am” which means “He will be.”  This makes sense.  If God says of himself, “I am,” then his people point to him and say, “He is.”  When God says, “I will be,” we say, “He will be.”

This is picked up throughout the New Testament by Jesus when he says “I am” or when people call him Lord.  But I just want to focus briefly on one.  In Matthew 14, beginning around verse 23 we find the disciples rowing across the sea while Jesus hangs back to spend time alone on the mountain (sounds a little like Moses in Exodus, huh?).  Jesus goes out to them walking on the water.  This action itself is significant since God is the only one seen walking on water in the Old Testament.  Think about it.  When he delivers, his people walk through water, but never on it.  That’s intentional.  And here’s Jesus walking on the water.  The disciples are terrified, with good reason.  They are professional fishermen, accustomed to this water and its storms.  And this storm has exhausted their professional expertise.  The description used is that they are tortured by the waves.  They are about to die.  And in the midst of this, the worst of all storms, someone is calmly walking on the water.  They can’t survive by means of their expertise in the boat.  Yet this person is so powerful that they barely notice the storm, or the disciples even.  Who else could it be but a ghost?

Jesus speaks to them, “Take courage, it is I.”  But that isn’t perfectly accurate.  He actually says, “Take courage, I am.”  That’s right.  He uses the same words from Exodus 3.  He’s saying, “Don’t fear this storm that has exhausted your professional expertise.  I created all of this, and I will manage all of this.”  How do we know this is how the disciples understood him?  Peter’s response.  “Lord, if it’s you…”  He isn’t saying, “Jesus if it’s you.”  No, that’s not it.  He heard the “I am” and he wants to put it to the test.  So he says, “YHWH…God of Moses, God of the Exodus, God who split the Red Sea…if it is indeed you…you can tell me to walk on water.”

But this is presumptuous.  It’s rude.  It’s such an incredible request.  It’s almost childlike in it’s utter immaturity.  You don’t test God this way.  Or…do you?  Notice, Jesus only begins to show anything similar to disappointment when Peter begins to sink!  He’s not bothered at all by his boldness, by his incredible request.

I don’t know your burning bush.  I don’t know your storm.  But I do know your God.  I know the one who shows up in the midst of our chaos to reveal himself as the one who is.  Don’t worry about the future.  Don’t worry about the past.  Rest in his unchanging existence and love for you.  Recognize that there is no problem so great that he can’t save you from it.  There is nothing beyond him.  He has no limit to his authority or power.  And HE loves YOU.