Learning from Jesus and the Samaritan {Crafting a Heart for Jesus} 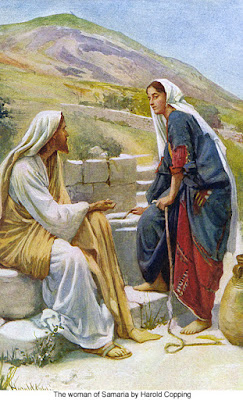 Last week we looked at Exodus 3, and how the phrase “I am” and the word “Lord” are used in the New Testament. This week I’d like to focus on one particular instance.  But first, a little more background.  We often take the gospels and smash them together to try to find as much as we can about the life and teachings of Jesus.  And while that has its place, one thing we often miss is the story that the individual gospel writer is trying to tell.  For instance, the gospel of John gives us Jesus’ use of “I am” at very crucial points in the story.  Many people organize their reading of the gospel around these declarations.  Today I’d like to look at the first one.  If this is an organizing principle in John’s gospel, then the opening one ought to tell us a lot, right?

Jesus is at a well in Samaria.  He’s not supposed to be there, but scripture tells us that he had to go there (John 4:4).  Something compelled him to go where he wasn’t supposed to go.  Samaritans were considered half-breeds.  Jews didn’t interact with them.  So there was a road going around Samaria just to avoid even walking on Samaritan land.  By the way, this is why “the good Samaritan” is such a scandalous story.  “Good Samaritan” was an oxymoron in the eyes of first century Jews.  Anyway, Jesus is compelled to contradict his culture.  And so we find him at a well in the middle of the day.

The woman he meets there is an outcast.  We can know this because women of the time traveled to the well in groups, and either in the morning or the evening.  She’s traveling in the middle of the day by herself.  This tells us that she is not accepted within the Samaritans.  The unacceptable people have rejected her.  From a Jewish perspective, this woman is nearly worthless.  There’s a prayer that existed around the time of Jesus.  Some Jewish men were known to have prayed, “Lord I thank you that I am not a Gentile, a dog, or a woman.”  This woman was a Samaritan, and therefore a Gentile.  She was an outcast, and therefore a dog.  And obviously she was a woman.  There is no cultural reason for Jesus to be here, but beyond that, there are ample reasons for him to not talk to her.

But he does.  He engages her in conversation.  And for the first time in John’s gospel, he utters the phrase, “I am.”  Think about that for a moment.  The lowest of the low, the outcast of the outcasts…she’s the first person to hear the incarnate God reveal himself as such.

There are two characters in this story, and as such there can be two points of application made.  First, if you are feeling low or rejected…know that Jesus feels compelled to go out of his way to reveal himself to you.  Just as everyone else believes you have no worth, Jesus is coming to meet you in your place of desperation.

Second, there are people around you who feel like this woman.  There are people who are never included, who are never considered, who are always ignored.  Take the opportunity today to be Jesus to them.  Go out of of your way, inconvenience yourself, scandalize yourself…for their sake.  Don’t worry what people think.  Let God reveal himself to them, through you.