What does the Bible say about ISIS? {guest post Monday}

First and foremost, nothing in this blog or in anything else I say is intended to lessen or excuse the acts of terror which have been wrought by ISIS.  They are evil.  They are evil of the highest order.  But how should Christians view them?  For that, I’d like to turn to Jonah.  I’ve recently been translating the book of Jonah.  Over the next few weeks I’ll be posting a few verses of that translation at a time with some detailed explanation of my translation decisions.  Hopefully this will help substantiate some of the claims I’m about to make.  Here’s a link to the next post.

Jonah was called to prophecy to Nineveh, the capital of Assyria, because their evil had risen up to God (Jonah 1:2).  Here are some of the things we know about the Assyrians.  They were evil.  They were evil of the highest order.  Nothing could excuse their actions.  This is helpful when we consider Jonah’s response to God’s call: he literally goes to the other side of the known world (Jonah 1:3).  He needs to head from Israel to what is now northern Iraq.  Instead, he goes to Spain.  Yeah, that’s a bit of a detour.  That’s the kind of response that was elicited by God telling him to go to Nineveh.

For a tangible example, let’s look at the Balawat Gates.  These imposing gates are intimidating enough on their own.  But let’s look at the bands that hold them together.  Basically, the Assyrians wanted to send a message, but the size of their gates wasn’t enough.  So they decorated those gates with artistic renderings of their cruelty.  They wanted visitors to know how they did business.  This included all manner of dismemberments, executions and tortures. 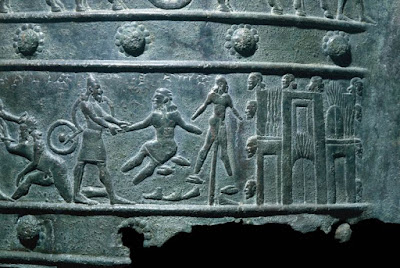 ©Trustees of the British Museum

Notice the person being torn apart beside a person being impaled, beside ten severed heads that are used as decoration.  That’s how Assyrians decorated their gates.  So it shouldn’t be hard to understand why Jonah was a little reticent about approaching them.

But actually…that isn’t why he avoided them.  They are perhaps the most despicable people on the entire planet, and he doesn’t seem to be afraid of them.  He’s afraid of something else entirely.  He’s afraid that....

You can read the rest of this post HERE at Ryan's blog Home Cooked Jesus.


Ryan blogs over at Home Cooked Jesus {the Jesus you need for the day to day and not just Sundays}.  He is also what I consider a Bible scholar, though he would disagree on technicality.  He studies Hebrew and teaches at a local bible college while pursuing a masters degree in the biblical field.