Crafting a Heart for Jesus - Unexpected Fulfillment - a Guest Post 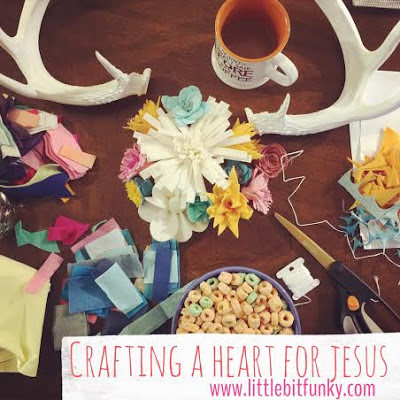 Jesus is the fulfillment of Old Testament prophecies. But sometimes that fulfillment
seems…unexpected. Here’s the quintessential example:

13Now when they had departed, behold, an angel of the Lord appeared to Joseph in a dream and
said, “Rise, take the child and his mother, and flee to Egypt, and remain there until I tell you, for
Herod is about to search for the child, to destroy him.” 14And he rose and took the child and his
mother by night and departed to Egypt 15and remained there until the death of Herod. This was
to fulfill what the Lord had spoken by the prophet, “Out of Egypt I called my son.” Matthew
2:13-15 (ESV)

But…that quotation is from Hosea 11:1. Hosea is pretty clearly talking about the Exodus, a past
event, instead of a future Messiah. Here’s the passage:

When Israel was a child, I loved him, and out of Egypt I called my son. Hosea 11:1 (ESV)
Well…that’s awkward. Matthew misunderstands a passage of scripture. Or does he? Hosea is
clearly talking about Israel. So how can he apply that prophecy to Jesus? Well, if he sees Jesus
as the fulfillment of Israel then his usage of Hosea might make sense. If that is his worldview,
then everything Israel does has to also happen to Jesus. If we look at Matthew’s gospel
carefully, that’s precisely what we see. Jesus has an exodus. After his exodus, he goes through
water (his baptism) and into the wilderness (his temptation). During his temptation, he is
tempted in the same way as Israel during their time in the wilderness. Jesus’ quotations during
his temptation point to God’s rebuke of Israel after their failures in the wilderness. Effectively,
Jesus is saying that he will succeed where Israel failed. After Jesus succeeds in the wilderness,
he goes up to a mountain and teaches about the law. All of this directly parallels Israel’s life.
This is Matthew’s thesis. He wants to show how Jesus is the culmination of everything in the
Old Testament.

With that in mind, let’s back up to the quotation from Hosea. Think about what Matthew is
saying. Jesus has his exodus, but from where? Who is Egypt for Jesus? From where is Jesus
fleeing? Israel. God’s chosen people have become like Egypt to God’s chosen deliverer. Let
that sink in for a moment. Jesus wasn’t safe at home. He fled to Egypt. His exodus was leaving
the promised land to seek refuge among the ultimate enemies of Israel. The expected roles from
the Old Testament have been reversed. Israel is not a safe place for the Messiah, but Egypt is.
For Matthew’s audience, this had to be jarring. This had to be offensive. Jesus was despised and
rejected (Isaiah 53:3). He came to his own, but they did not receive him (John 1:11). But this
also needs to offend us. This needs to jar us. Unfortunately, and against all odds, sometimes the
safest place for us is not with God’s people. Sometimes we need to not be around Christians.

And sometimes…we are the Christians other people shouldn’t be around.

That’s the gospel. It’s unexpected. It counters our intuition. It turns our preconceived ideals on
their heads. And while it is simple in the sense that Jesus loves you and wants a relationship
with you…it is anything but simple in the messy context of life.

Sometimes this means removing people from our life. Sometimes it means revoking someone’s
ability to hurt us. But even when that is appropriate, we also need to die to self, and love the
person that is intentionally hurting us. That runs contrary to everything we want to do. It is
nearly impossible. Let’s return to the passage in Matthew. He’s quoting Hosea to indicate that
Israel has become like Egypt. Here’s the shock: by comparing Israel to Egypt, he’s actually
trying to communicate the gospel to them. He’s trying to show them that Jesus died for even
them. Matthew might rephrase Romans 5:8 to say, “While we were yet Egypt, Jesus died for
us.” Rather than showing them how they have missed it, he’s trying to show them that grace is
available in the midst of abundant mistakes.

Think about that for a moment. The people who ought to have known Jesus, ought to have
recognized him…those people missed him by a wider margin than nearly anyone in history. And
Jesus died for them. Jesus died for his unexpected enemies, to show his love to them. What are
you doing about your enemies?