Pharisees and the Sinners 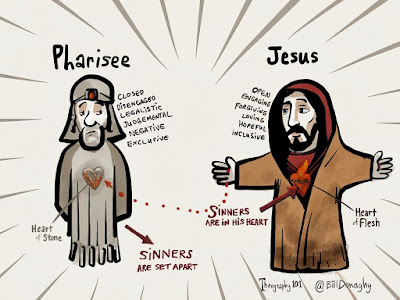 (image via HERE)
Here's what I am thinking about.

Pharisees and why you should worry if you are told not to associate with someone.

Ahhh...the Pharisees, today we usually think of them as the Jesus hating bad guys of the bible.  While that is partially true, we forget that they also had a deep love and devotion towards God.  They knew their religion, their scripture was memorized.  The problem, it seems is that it went to their heads a bit.   It became about the show, about being the most right, about the Law.   They had a fulfilled promise right in front of them and they couldn't see it for their self-righteousness.  It had to be their way.

Jesus came to show them about the heart.

What is that saying? Absolute power corrupts absolutely? Yes.  The Pharisees were the spiritual powerhouses of the day until Jesus came along and started mucking it up.  They were going corrupt, spouting laws and not following them themselves.

"Here are the rules everyone, and here is why they don't apply to us".  They were very concerned about all the laws not being followed while they brazenly opted out of the ones that were not convenient to them.

There was a long list of people Jesus wasn't supposed to talk to.

Tax collectors, loose women, WOMEN, known sinners of any sort.  The Pharisees had a long list of people they thought they were better than.  And they weren't afraid to show their displeasure when Jesus sat down to eat with them.

Jesus all but got a scroll: "Whatever you do, don't associate with those people.  They are not good enough for us. BEWARE!!".

Jesus wrote back "Who do you think I'm here for?".

We get that scroll and fear is inserted into our hearts.  We may believe lies that aren't true.  We forget the character of the people that scroll is written about.

The funny part? The Pharisees sent out the same scroll to everyone else: "Whatever you do, don't associate with that Jesus.  He's trying to win you over to HIS side.  Stay away!"

When they couldn't convince Jesus of His wrongs and clear up His "muddied" thinking about loving everyone all the time and in every way.  They flipped on Him.  "If he's not on our team, he must be on theirs".

The thing is, there are no teams to anyone else.  Only the Pharisees see teams.

The seen sinners are too busy feeling seen.  Jesus does not overlook them.  He stays.  He holds their hearts in His hands and calls them His own.  He tends to them.  He doesn't care about what house they live in.

A huge thing about the Pharisees?  They felt right, justified.  The sinners felt pain, heartache, a NEED for mercy.  There is a posture difference.

In one there is a posture of competition, control, righteousness, a lack of compassion, a serious lacking of "practice what you preach" and jealousy.  Not to mention fear.  There is a love of God in there, but it's covered by layers of control.

What other reasons than fear and jealousy would the Pharisees have to ban Jesus?  He was radically preaching LOVE over rules.  What if people got wind of that freedom?  There would be a mass exodus from that church.  Freedom trumps rules every time.
In the sinners group you see hope, empathy, joy in being seen.  There is compassion and humility.  There is "we have been wrong and wronged and that makes me so grateful for this love".  There is a willingness to get dirty with other sinners.  There is an ache that leads to unity.  There is service over self.  There is freedom over rules and everyone gets some.

All I am saying is this.  This is a great example of why we should be VERY careful when one adult tells other adults not to talk to someone.  A red flag should go up.  There is something wrong in every scenario where that happens.  One adult telling another adult what to do is not normal.  Even good bosses don't make demands.  Nor do good husbands, teachers, partners, life coaches, pastors, wives, friends.

It comes down to fear or jealousy.

Do not be afraid for one second to use your very own connection with God about what you are supposed to do.  Who Jesus says to love.  Where God tells you to go.  God is willing, able and capable to talk to you without the need of a voice box to do it for Him.

God is a gentleman and He would never ban you from a thing, not even the bad ones.

So why take that kind of treatment from a mere human?