Crafting a Heart for Jesus - How Awesome God Can Be 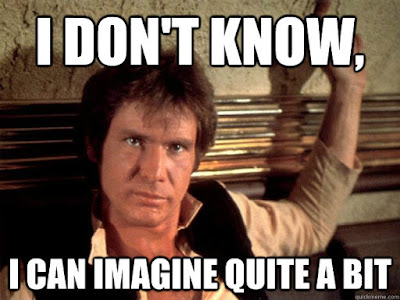 Another week, another post from Ryan.  I hope you'll enjoy this feature, a fresh perspective from someone who isn't me. :) Feel free to leave comments with questions, Ryan is great to answer them.

Ephesians 3:20-21 – Now to Him who is able to do above and beyond all that we ask or think according to the power that works in us—to Him be glory in the church and in Christ Jesus to all generations, forever and ever. Amen.

Okay, so what does that mean?  We all know that we have crazy ideas.  We have ideas that we wouldn’t dare speak out loud because of how crazy they sound.  We all have these, and we probably soften them a bit before we tell anyone.  Instead of saying, “I want to be a world renowned author” we say “I’d really like to write more often.”  We downplay our dreams because we think they are too big.  Beneath the surface burns the passion of a thousand suns, hoping that our dreams will come true.  But we won’t share it with anyone but those with whom we are closest because it might sound presumptuous or crazy.

That’s why Paul makes up a word (ὑπερεκπερισσος).  See, περισσος means extraordinarily, or exceedingly.  But that isn’t enough.  Let’s try εκπερισσος.  That’s the same word with a preposition added to the front.  That’s one way to emphasize things in Greek.  In fact, περισσος is already a compound word.  So it is already emphatic, but just not emphatic enough.  Εκπερισσος doesn’t actually exist, but it would mean something like more than extraordinarily/exceedingly.  Is that enough?  Nope.  Let’s add another preposition.  God is able to do ὑπερεκπερισσος what we can ask or think.  That’s like saying on top of something more than extraordinarily what we can ask or think.*

Let me say that in a different way:

What you say is tamer than your dreams.

What you dream doesn’t go far enough for God.

What does this mean? There’s literally nothing we can ask him that is too much.  C.S. Lewis put it this way:
…it would seem that Our Lord finds our desires, not too strong, but too weak. We are half-hearted creatures, fooling about with drink and sex and ambition when infinite joy is offered us, like an ignorant child who wants to go on making mud pies in a slum because he cannot imagine what is meant by the offer of a holiday at the sea. We are far too easily pleased.*

Don’t be too easily pleased.  Your father loves you.  He is able to do more than what you ask, more than what you think.  He doesn’t just exceed expectations.  No imagination can begin to grasp how good he is to us.  He has good things waiting for you.  Sometimes he’s just waiting for you to ask.
Next week, we will continue this train of thought by discussing what we should do when it doesn’t look like God is all that awesome.

1 The research found here can be replicated partially on https://www.biblearc.com/ (which I heartily recommend) as well as Perseus (http://tinyurl.com/oy6ajtg).

2 This is from the intro of The Weight of Glory, which I recommend all Christians read on a semi-regular basis.  A free copy can be found online at http://www.verber.com/mark/xian/weight-of-glory.pdf.