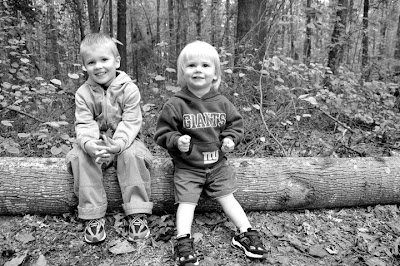 I've been asked by BlogHer and Huggies to take some walks down memory lane and explore some (what I think will be) FUN subjects about babies and having them and getting ready for them and all the fun stuff that goes with THEM! I volunteered for this series for selfish reasons. I think it will be a great way to document some thoughts and feelings that maybe I haven't before but should have. I hope you will enjoy them, too!

Today's post is all about the name game! What WILL you name that baby? What a huge job, right? You want to somehow find THE perfect name for that tiny little human you have been carrying around for the last nine months. It's a huge, daunting task that should not be taken lightly. Never mind that you don't really KNOW the person you are naming.

With our boys, we knew we wanted a strong name for each of them. There are some boys' names out there that just don't scream BOY or man or strong. We wanted to name our boys something they would have to live up to.

Naming Moses was much more difficult than naming Aaron. While pregnant with Moses, we went through name after name after name. Some of them I shudder to think of having used...and thankfully we didn't have a girl. I won't tell you what her name would have been.

I was pretty far along with Moses (at the time still an unnamed baby) when Doug and I went out to dinner. The song "Moses" by Coldplay came on, and so we threw the name out there, batted it around a little, and before we left we had pretty much decided that our baby's first name would be Moses IF he was a boy. (With Moses, we didn't find out the sex before he was born.) When it came to picking a middle name, an easy choice emerged: Doug's grandpa is Austin, and we loved both the name and the man, so Moses Austin became our first little boy.

When it came to naming Aaron, well, like I said it was much easier to name him. You can't have a Moses without an Aaron. We decided to keep with the grandfather line and used a name from Doug's other grandpa, Howard. That's also Doug's middle name and Doug's dad's middle name. It's also fun that Aaron's initials are the same as Doug's dad's. :)

So both boys ended up with strong, meaningful names. Names they have to live up to. Names we love as much to this day as we did when we gave them.
My humble advice to you when naming your new baby?

Look A LOT! Makes lists, look on the internet and books. I did not ask people, other than my husband, what to name my baby. People get all weird if you don't use their name suggestions. In fact...
DON'T tell anyone your baby's name or names you are considering. Wait to tell them until the baby is born. People are a lot less likely to weigh in on your choice once it's already written on the birth certificate. With Moses, only one person besides Doug and me knew his name. With Aaron we were a little more relaxed, but I think we kept the middle name a secret at least. Maybe.
And finally...you HAVE to agree with your husband on the name choice. You both have to love it. You can't wait until your husband is out of the room and rush the nurse to write up the birth certificate. Don't use an old boyfriend's name or some name your husband hates. Just think how YOU would feel about that. :)
Above all, give it lots of thought. And don't worry too much about how kids in school will make fun of it. No matter what you choose, kids will always find a way. :)
Be sure to check out all my other baby advice posts HERE. Worth a read, for sure!

Check out the Huggies Mommy Answers Facebook app!
Find more posts from bloggers sharing their experiences of motherhood on the Huggies page on BlogHer.com.
Email Post