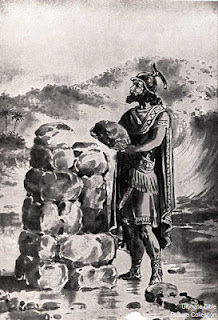 You can read part one of my story by clicking HERE.

So after the floor fell through in Spring of 2011 we collectively decided to take some time and collect ourselves.  Wait.  Listen for direction from God.  Live life without expectation for a while.  We honestly hoped for nothing for a while.  It was too scary to place stock in anything.  We buckled down and decided to enjoy ourselves, our family, wherever we were.  Painfully, I enrolled Moses in school for the coming year and we spent several months just living for the day.  Praying.  Waiting.  Walking through the tunnel in the dark, knowing there was an end, just having no idea where or when it would show up.  We still felt the pull for home and believed we would end up there, just nothing was making sense.  We put our house on the market for a bit to see how it would go.  It didn't go.  There were way too many foreclosures in our radius to do us any good.  There way no foreseeable way out anytime in the near future.

Hurts began to heal a bit.  God ministered to our hurting hearts.  Little did we know we were on our way out of the valley...but in such a slow pace that you couldn't really decipher the direction.

Looking back, God had never been closer to me.  I can remember a crystal clear moment when I learned the difference between feeling His (perceived) absence and Him being so close that I couldn't see Him.  Kind of like, if you stand an inch away from a Monet it looks like a mess but in reality it's an amazing masterpiece.

Despite my feelings about what God was doing through all of this, I never closed our lines of communication.  I've never been so diligent about reading my Bible every day.  I didn't want to miss a message or a word or a sliver of anything He wanted to tell me.  I clung to it like a lifeline.  And I learned some seriously awesome life long lessons.  I learned so much and felt His presence SO CLEARLY that in a weird way now, I miss the hard times.  We always need Him, but in our times of desperation we hold on to Him for dear life, we let down our guards and do what we have to do to be close to Him.  It's something that I find difficult to replicate on the normal days.  I still need Him, and love Him and desire what He has to teach me but it's hard to produce healthy desperation in times of calm.  It's a lot like when our kids are sick...we don't wish them sick, but we sure do love how they let us cuddle and snuggle with them when they are, right?  They need us to care for them and give them the things that they need to get well.  Then they go and get better and go on with life...running, leaping and driving us crazy.  Try to snuggle them then and you get away with it for about a second before they are wriggling free to go be healthy.  They still need us, just not with desperation.

Anyway, during one of those Bible reading/studying/desperate for a word/God feels sooooooo far away times, God explained something to me.

He said:  Take a look in Exodus 33:22.  There it says "When my glory passes by, I will put you in a cleft in the rock and cover you with my hand until I have passed by."   A passage I had read a lot but never given much thought.  I always just pictured God saving Moses from God's own awesomeness.

This was given to me during a particularly dark time.  I felt alone.  Like God was FARRRRR away from me.  I felt abandoned by Him, by friends, by people in general.  If you know me you noticed, or were effected.  It was ugly.  I was mad and hurting and those aren't the nicest people ever.  I felt unloved my almost everyone I knew.  It was maybe the darkest ever place I've been.

And God cracked the darkness with Exodus 33:22.  To me this spoke a speck of light into my life and was a turning point, a clearing of the final cobweb and the return to Joy.  This verse will always speak to me.  Now that I KNOW what it says, it can't not.

It says:
When my glory passes by = He is coming.  He is here.  A promise.
I will put you in a cleft in the rock = He is protecting me.  He is keeping me safe.  With His physical self.  I am a priority to Him.  He cares enough to put me in a safe place.
And cover you with my hand = He will physically hold and touch you.  You will be in the dark because the creator of the Universe is covering you to keep you safe.  Do you think He would only sort of cover you?  Or would He completely cover you?  THAT kind of complete coverage would feel a lot like complete dark, no?
Until I have passed by. = You may not even fully know or understand just HOW close He was until He no longer is.  When the desperation ceases.  When we stop clinging to Him for everything.

All of these things became clear and solid truths to me.  Like I said, in a way, I miss the hard times.  I'm fighting for desperation for Him but He has pulled us through so much and broken so many "rules" that there is no turning back...there is no such thing as coincidence.  There is no one who loves me more or truer.  He has used this time of darkness to stitch Himself into my heart forever.

I am a different person than I was two years ago.

Recently, we discovered that Moses' constant runny nose in the Fall and Spring was due to seasonal allergies.  We noticed that Moses just wasn't hearing us like he used to.  We would have to yell to get his attention.  And not in a "he's five" kind of way.  I was concerned enough to take him to the doctor.  It was maybe his 4th non-well child visit ever in his five years of life so it was a big deal.  I took him in, the doctor looked in his ears and told us that one ear was completely full of drainage from his nose, the other ear partially full.  It was like he was hearing us from underwater.  We got him some prescriptions and we know he needs them every Fall and Spring.  His hearing now is as good as new.  Except for the "he's five" part.

My life before these last two years was a lot like hearing from underwater.  Since I recognizing I had an issue, going to the healer, and doing what he prescribes, my hearing is as good as new, too.