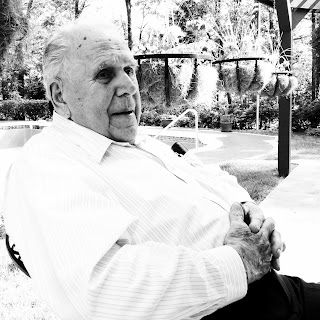 We're nearly home from a visit up north where we were able to surprise Doug's mom and grandparents for Mother's day.  Doug's grandparents are both 90 so each and every visit is a precious one.

During this visit, I asked Grandpa what his favorite story is, so that Doug could record him telling it (thank you iPhone!).  He proceeded to tell us a story about a time where he was heading home from a business trip.  There was some sort of snowstorm that kept most of the flights grounded.  In an instant a flight opened up and then another opened up that would be leaving five minutes later.  Grandpa convinced his boss to get on the second one.  The first flight (that he didn't take) collided head on with another commercial flight with 100% fatality.   This man is full of amazing stories and we will be taking advantage of hearing them told with each visit and do our best to preserve the ones we can so our boys can hear them first hand one day.

We are thankful and feel blessed with each opportunity to see them!
Email Post