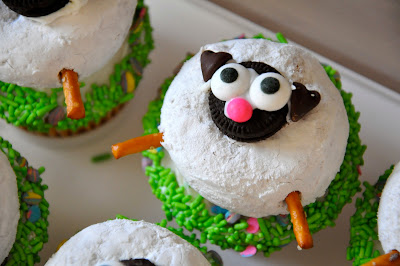 well...this day started off good.
both boys slept until 7am.
i stepped on the scale to find out that i am DOWN 8lbs since starting yoga meltdown.
i got to wear a skirt that has not fit me comfortably since having kids.
the boys were getting along.
i had time to work on orders before taking moses to school. 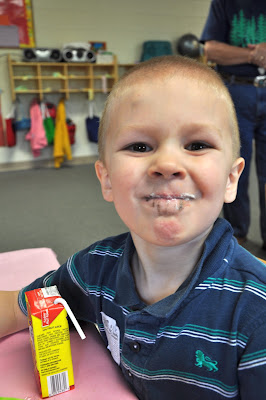 and aaron and i got to go to moses' school for his Easter party and egg hunt.
moses' teachers are SO WONDERFUL.  they include the little siblings whenever they can. 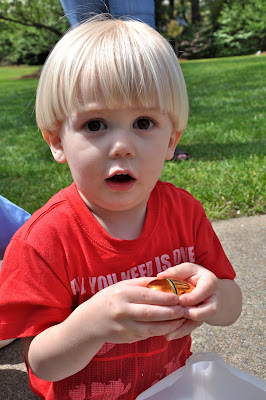 aaron had the best time having cupcakes while sitting with the big kids and doing the egg hunt.
it was a wonderful morning.  good kids.  good weather.  skinny mommy.
and then i did myself in.
i said (TO MYSELF mind you...which should not count)
"what a great day...i feel like i am being a GREAT mom today...yay me!"
which of course, as all mothers know, causes a crack in the universe and sends children everywhere into a panic stricken frenzy.  so if your kids suddenly turned crazy on you...my bad.  so sorry.
moses completely lost it when i told him that i had to keep an eye on aaron during the "song and dance" portion at the end of the school day and i couldn't stand where he wanted me to stand.
lost his marbles, he did.  granted, i get it.  he was bummed that i couldn't focus on just him.  but i tell you...an aaron turned loose in that classroom is trouble.
then he just couldn't pull himself together.
one thing after the other until we left school.
we got home and we had a long talk with him...and to his credit he "got it" and felt remorseful about his behavior.  and for the most part changed his attitude and went on to have an OK day.
but it was too late.  he had infected his brother. 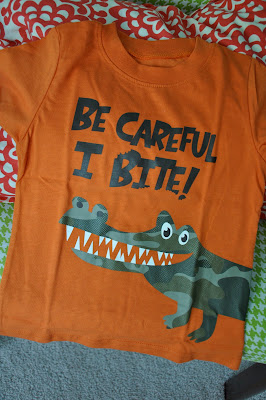 everything for the rest of the day was dramatic for aaron.
whose nick name we are thinking of changing to "little sinner"...
this shirt i found for him at target?  could not be more perfect.
our day proceeded downhill at a rapid pace. 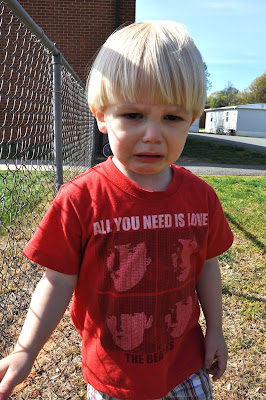 i...fed them frozen waffles for dinner...wiped aaron's nose with a used tissue i found in the car...was ensured that i will have an early date with dementia...started the count down to bed time the moment nap time was over...had a clear understanding of why some parents snap...considered the cost of shipping kids to grandmas...counted the days until we go to florida...and had endless power struggles with aaron...but i stuck to my guns with him.  he seems to take comfort in losing to us in some way...you know when he says "milk RIGHT NOW" and i say "not until you say please, mama (and not RIGHT NOW)".  and we have a stand off until he gives in.
this kid.  i love him...but boy oh boy.  he is work.
everything made him mad.  getting him into the tub was similar to how you would expect a cat to behave...legs and arms spread as far out as possible to avoid contact with the water...
but the kicker...the oh my word hedidnotjustdothat...we left the playground much to hoho's dismay.  he kicked and yelled all the way to the car.  he PUNCHED doug* IN THE FACE.  but that's not the kicker...
as we are driving away from the park, about 25 mph or so the little sinner...
OPENS THE CAR DOOR AS WE ARE MOVING!!!!
(he was in his carseat strapped in...and the act of getting it open STUNNED him...
and we fixed the child lock upon getting home).
he was p.o.'ed about leaving.  he was a hot mess.
he was in bed by 6:39pm.
we won.  the end.
*doug would like you all to know that he was a supportive parent and husband.
and he was.  and he is.
Email Post
Labels: Aaron brothers moses