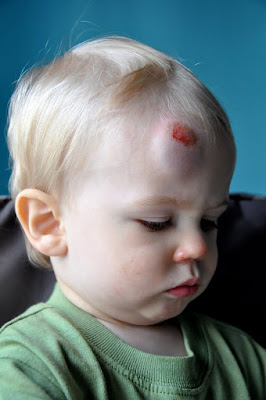 First of all...I had to document this here...you know, so it will be included in a future edition of my blog books.
We were playing around in the tennis courts at a nearby playground when one of the poor little guys legs gave out on him...he immediately got the largest gooseegg that I have ever seen on someones head.  It stuck out a good 3/4-1in instantly.  This kid is one tough little man...he was done crying about it before we could get back to the car...and resumed his normal self.
My heart, I am sure, may never be the same.
And the rest of this...is just to share.  A couple of my sneaky little mom tricks.
Both of my boys eat a great healthy breakfast and lunch.  Neither has ever been big on dinner.
Our general policy is...you eat what you are served at dinner...or you don't eat.  But I refuse to make them eat...I just think that sets them up for bad eating habits in life...but I will include at least one thing with dinner that I know they like.
Moses knows the deal and he knows that if he doesn't eat what we serve for dinner then he gets nothing else for the rest of the day...and only water to drink...cause this boy could live on milk.
If they don't eat dinner...I don't worry because I know that what they HAVE eaten that day is healthy and good for them...we try hard not to keep junk in the house (except for the secret mommy/daddy chocolate stash) and we never really eat fast food besides Chick-fil-a or Chipoltle.
Aaron...well he is still trying to figure out what he does like and what he doesn't like...a favorite one day is hated the next.  But he will always eat yogurt or oatmeal.  And like Moses, everything he DOES eat is healthy...so I don't worry about dinner so much if he doesn't want it.
But I DO sometimes worry about whether they get enough veggies...especially on the picky days. I have tried to "hide" veggies in other foods...and that never works.  Only recently did we start to let Moses have juice on a regular basis...after doing some research I found these: 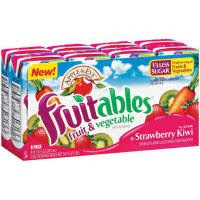 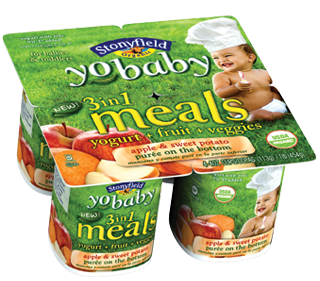 Which is really the same as the juice...but in a yogurt form. A fruit, a veggie and a yogurt.  And this is organic...which makes me happy too. :)
So those are a couple of my tricks...in case you didn't know and could use them for yourself.
Any good "sneaky mom tricks" to share?
Email Post
Labels: hints for moms mom stuff